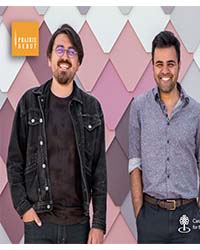 The earliest version of the santur dates back to as far as Babylonian stone carvings (669 B.C.) Now, Prairie Debut audiences have the opportunity to hear the evocative sound of this ancient Persian instrument performed in contemporary style that traverses time. The long resonating tones of Farhad Khosravi’s santur weave naturally with the earthy sounds of Daniel Stadnicki’s percussion, creating a seamless musical journey. Their second collaborative album, Mosàfer, was released in August 2020 to critical acclaim. Farhad and Daniel have performed in multiple venues and festivals in Edmonton including Royal Alberta Museum, Winspear Centre, Alberta Culture Days, Mile Zero Dance, and the Yardbird Suite. www.prairiedebut.com/2021-22-khosravi-stadnicki/

This is a general admission performance - the seats are on a first come, first serve basis when you arrive at the theatre.

Doors open 1/2 hour prior to start of performance.