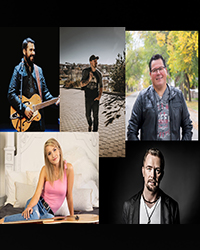 An incredible evening of performances from some of Saskatchewan’s top artists on Canadian radio.For one night only 5 award winning songwriters will be featured in the same show, on the Dekker Centre stage. The first half of the show will showcase each artist performing original songs in front of an award winning backing band made up of players from all corners of the province. The second half will feature a songwriters in the round, where each artist will take turns telling the stories behind some of their biggest songs. Join us for an intimate and interactive evening of great music, great musicianship and great songs.