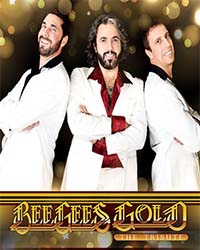 John Acosta, as Barry Gibb, has performed in Bee Gees tributes all over the world. His portrayal of lead singer Barry Gibb is with a zest for detail, like no other. From the look - to the trademark falsetto - you will close your eyes and say it's Barry! John Acosta’s amazingly well-crafted Bee Gees Gold tribute Is the ultimate salute, creating the experience of seeing the Bee Gees in their prime, LIVE ON STAGE, ONCE AGAIN! With the detailed vocal stylings of John Acosta (Barry), Daryll Borges (Robin) and Jeff Celentano (Maurice) as the Brothers Gibb, you'll be blown away by the magical sensation that envelopes the room as you're transported back to another time through the look and feel of the original group in their absolute prime. This tribute is considered the VERY BEST Bee Gees tribute in the world and plays to sellout crowds nightly.

Backed by a live band, this Las Vegas-style Bee Gees tribute re-creates the look and sound of the Bee Gees from their start in the 1960s through the late ’70s - with their unique style that made them legends in their own time. Performing such early hits as “Massachusetts” and “I Started A Joke” - to the later disco-era classics “Stayin’ Alive”, “You Should Be Dancing” and many more solid gold standards of that era. This is a show you will remember for years to come - the ultimate tribute to the Bee Gees - Barry, Robin and Maurice - the Brothers Gibb.