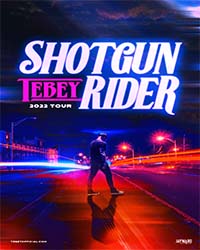 Nashville resident and Ontario, Canada native, Tebey, is a platinum selling artist, award winning producer and accomplished songwriter with six #1 songs in his repertoire of hits. His much-mispronounced name (read: TAY-bay) is of Nigerian descent – his father’s birthplace, but Tebey grew up in the small town of Peterborough and went to high school in Burlington. While enjoying simultaneous success on the football field, he and his father made the decision to move to Nashville in his mid-teens to pursue his music career, while his mother stayed back in Canada to care for Tebey’s brother and sister.